Suicide Squirrels and the Writing Retreat

Posted on October 12, 2015 by Michelle McGill-Vargas 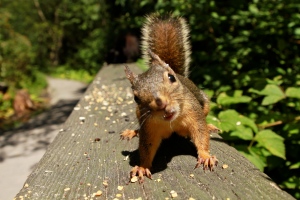 After a writing friend mentioned how she would use the winnings of a recent contest she’d entered to attend a writer’s retreat and reading about writing retreats in an issue of Writer’s Digest, I wrote about creating my own retreat in the April 2013 post, “7 Steps to Creating Your Own Writing Retreat.” Well, I actually did it. Below details how I used the seven steps gleaned from the Writer’s Digest article to organize my very own weekend retreat. Three brave souls from my critique group dared to try this experiment with me. So thanks to Liz Wilson-Cotey, Laurie Chase, and Julie Perkins for inspiring this post.

Michelle hails from Gary, Indiana where she enjoys writing historical fiction, flash fiction, and short stories. Her writings have appeared in "Lutheran Witness", "Splickety Magazine", "The Copperfield Review", and "Typehouse Literary Magazine." She served as vice-president of the Indiana Writers' Consortium. Until the day her historical fiction manuscripts get published, she pays the bills as a special education administrator with a background in deaf education. In October 2018, she will be a contributor to Concordia Publishing House's quarterly devotional series "Portals of Prayer." Visit her blog at www.michellemcgillvargas.wordpress.com
View all posts by Michelle McGill-Vargas →
This entry was posted in Goal Setting and tagged squirrels, writer retreat, Writer's Digest, Writing. Bookmark the permalink.

2 Responses to Suicide Squirrels and the Writing Retreat