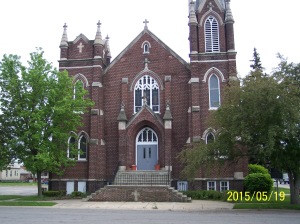 Thoughts of Gary, Indiana often include ones of the steel mill, the Jackson 5 and hope that the city can bring back the glory days current and former citizens remember. But there is one bit of history that stands out among the usual images of Gary’s urban decay. St. John’s Lutheran Church is the city’s oldest congregation, with baptismal records dating back to 1863.

When the town of Tolleston was platted by George Tolle in 1853, he set aside land for a 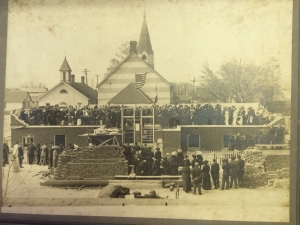 Construction of school building in 1914 behind the second church built in 1888. The school still stands.

church and cemetery (Waldheim). The town, predominated by German settlers, soon organized what would be St. John’s Lutheran Church. According to the Tolleston Old Settlers Centennial 1851-1951 (from the Calumet Regional Archives), its first congregants met in the parlor of a home at 1925 W. 10th Place, Gary, before erecting the first church building in 1868. Another was erected in 1888 to serve the growing congregation. The current structure (above) was erected in 1922.

Itinerant pastors, beginning with Rev. Henry Wunder in 1863, traveled by horse and buggy from Chicago to serve the congregation until the Rev. Herman Wunderlich was called as its first full-time pastor in 1871.  According to church records, he is buried at Waldheim Cemetery, though his grave marker is no longer visible. A school house was also erected (pictured above) and still stands today behind the current church building.

Stained glass depiction of the Resurrection on east wall of sanctuary.

One of the most striking parts of the building are the enormous stained glass windows. The two largest ones depict the birth and resurrection of Jesus. Smaller ones are of various Bible stories. In the choir loft sits the Wangerin-Weickhardt pipe organ that former organist Jayne Carter attempted to teach myself, my sister, and her youngest daughter to play. Neither my legs nor my fingers were long enough to reproduce the magic Mrs. Carter made on that instrument! Anyone who used to attend the church (at least back in the 1980s when I was a kid) will remember the three worship services held every week, Sunday school in the basement and parts of the old school building, and Vacation Bible School in the summer full of neighborhood kids whose families didn’t even worship there.

Remarkably, only eleven pastors have served the congregation in its 145-year history. Most notable are Rev. August Rump who served from 1887-1940, and my godfather, the late Rev. Norman Brandt (pictured right) who is probably best remembered wearing his famous bowtie while inviting in every soul walking down the street to worship. Pastor Brandt and his wife, Helen (pictured below), inspired two characters in my manuscript Striving After Wind. Instead of Rev. Wunderlich, “Pastor Teddy” (Theodore was Pastor Brandt’s middle name) and his wife Helen served as the first family of a Lutheran congregation. In the story, they freed my main character from slavery and brought her to Tolleston just before the Civil War in 1860. That storyline drove my research into the town and the history of the church where my family had worshipped since the late 1950s.

I’m happy to report that the congregation is still there. The old church bell still rings announcing the start of service at 9am Sunday mornings (I remember it also ringing at the start and conclusion of the Lord’s Prayer during the 11am service). Tons of old photographs in the second and current church building and  other historic records are housed in the office (the old white parsonage in the lot adjacent to the church), some of which can be found on my St. John’s Lutheran Church History Pinterest page. The old register with baptisms, confirmations, marriages and funerals are also still there. Anyone wishing to view those historic records, see the beautiful stained glass windows and ornate altar, or even worship there can contact Michael Nicks at 219-944-0654.

I hail from Gary, Indiana where I enjoy writing historical fiction, flash fiction, and short stories. My writings have appeared in "Lutheran Witness", "Splickety Magazine", "The Copperfield Review", "Typehouse Literary Magazine," and was a contributing writer to Concordia Publishing House's "Portals of Prayer" (October 2016). I've served as vice-president of the Indiana Writers' Consortium and am currently a board member of Midwest Writers. I am currently represented by Melissa Danaczko of Stuart Krichevsky Literary Agency, Inc. I pay the bills as a teacher of the deaf/hard of hearing. Visit my blog at www.michellemcgillvargas.wordpress.com
View all posts by Michelle McGill-Vargas →
This entry was posted in genre writing, history, Writing Inspiration and tagged Gary history, Gary Indiana, George Tolle, historic churches, Lutheran Church-Missouri Synod, St. John's Lutheran Church, Tolleston. Bookmark the permalink.