Posted on June 1, 2015 by Michelle McGill-Vargas 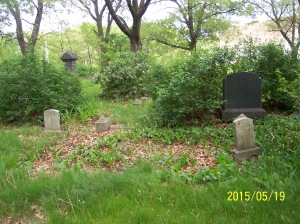 At about 17th Avenue and Grant Street in the Tolleston neighborhood of Gary, Indiana lies a forgotten cemetery. Numerous trees and flowering shrubs obscure the few remaining headstones inscribed in German, English and an occasional Cyrillic script. This is Waldheim Cemetery, sometimes called Tolleston Cemetery after the town– and now neighborhood– where it is located. I’ve passed this place my whole life, but never paid it any mind until I began exploring the town that was here before the Steel City came into existence.

Though the first historical fiction manuscript I wrote took place in Tolleston between 1876 and 1883, my protagonist actually arrives in the area in 1860. I needed evidence people lived here during that time. The cemetery made for easy verification. I’d used this location in a scene where my female protagonist, the sole black person in Tolleston, buries the widow who freed her from slavery. In reality, many Tolleston pioneers are buried there. Unfortunately, most of the headstones have either been destroyed or the inscriptions eroded away. During my visits there, I was able to locate headstones with death dates as early as 1896 and as late as the 1950s.

In the mid-1800s, town founder George Tolle platted the area and set this land aside 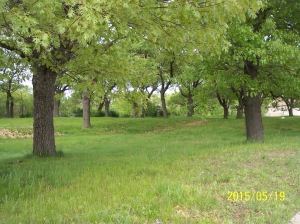 for a cemetery. St. John’s Evangelical Lutheran Church on 10th Avenue and Taft Street maintained Waldheim’s burial records. My brief stint as office secretary for the historic congregation (my family had worshipped there since the late 1950s), gave me access to the ancient register of over one hundred years of baptisms, confirmations and funerals, including the scores buried at Waldheim. Without those records, it’s difficult to believe that more than a handful are buried there. Half of the cemetery (left), about the size of a city block, appears more serene park than consecrated burial grounds.

There are some names still visible that I recognized in my research and used in my story. For example, the headstone pictured below may belong to the owners of a 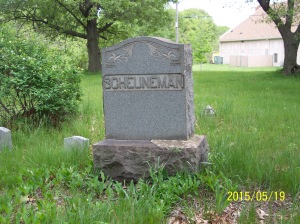 Tolleston dry goods store that was located near 9th Avenue. I used that in my manuscript as the place where the aforementioned protagonist, working as a poacher on the run from Tolleston Gun Club game wardens, sold her haul. There are actually several headstones and family plots with the name Scheuneman scattered throughout the cemetery.

Those of you familiar with Gary history might recognize the name Gibson (below). Maria Gibson, along with her husband, was the owner of the Gibson Inn, a stagecoach stopover for pioneers traveling between Detroit and Chicago.

Headstone of Maria Gibson, owner of the Gibson Inn

The Gibson Inn was located at what is now 14th Avenue and Madison Street where Froebel School once stood.

Today, the cemetery is flanked by a tiny strip mall, a private residence, a church and a Kingdom Hall. It is maintained by the Calumet Township. The headstones that haven’t fallen over are visible from the street. Several demarcations of family plots like the Scheuneman’s still survive. I wonder how many Garyites like me have passed this place without giving it a second thought.

Check out my Pinterest page to see more of the cemetery and headstones with visible names. Maybe some of you former Garyites might recognize some of them.

I hail from Gary, Indiana where I enjoy writing historical fiction, flash fiction, and short stories. My writings have appeared in "Lutheran Witness", "Splickety Magazine", "The Copperfield Review", "Typehouse Literary Magazine," and was a contributing writer to Concordia Publishing House's "Portals of Prayer" (October 2016). I've served as vice-president of the Indiana Writers' Consortium and am currently a board member of Midwest Writers. I am currently represented by Melissa Danaczko of Stuart Krichevsky Literary Agency, Inc. I pay the bills as a teacher of the deaf/hard of hearing. Visit my blog at www.michellemcgillvargas.wordpress.com
View all posts by Michelle McGill-Vargas →
This entry was posted in history, Writing Inspiration and tagged abolitionists, cemetery, Gary Indiana, history, Tolleston Cemetery, Tolleston Indiana, Waldheim Cemetery. Bookmark the permalink.